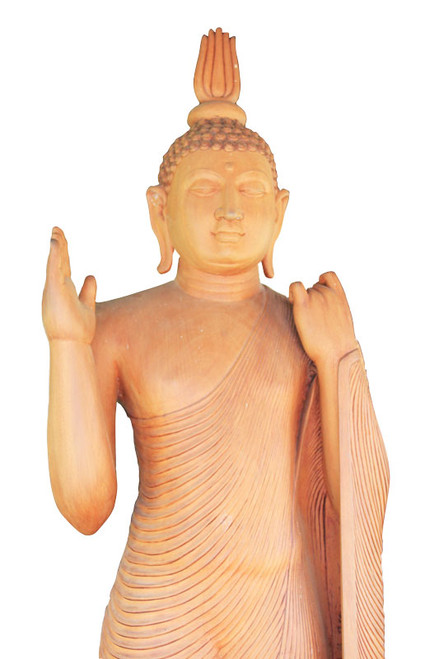 The Avukana statue is considered to be one of the best examples of a standing statue of the Buddha from ancient Sri Lanka.

The Avukana statue is a standing statue of the Buddha near Kekirawa in North Central Sri Lanka close to the Kala Wewa reservoir. The statue, which has a height of more than 40 feet (12 m), has been carved out of a large granite rock face during the 5th century. It depicts a variation of the Abhaya mudra, and the closely worn robe is elaborately carved. The staue was constructed during the reign of King Dhatusena. Avukana statue is one of the best examples of a standing statue constructed in ancient Sri Lanka. Today pilgrips visit this staue for veneration and while it had become a popular tourist attraction in the country.

Gautama Buddha: (Also known as Gautama Supreme Buddha, Siddhārtha Gautama, Shakyamuni, The Blessed One or The Buddha) was a sage who lived in India around 563 BCE, and is the founder of Buddhism. Gautama Buddha became enlightened at the age of 35 by eradicating all taints and defilements such as craving, hatred and delusion from his mind without anyone's help. For 45 years, until the attainment of Nibbana (passing away), Gautama Buddha taught the path that leads to happiness through the cessation of suffering. Millions of ascetic and lay followers of Gautama Buddha found their ways to this true happiness by following His teachings. Even today, several hundreds of millions of people across the world venerate Gautama Buddha and his teachings, and train their minds to eradicate craving, hatred and delusion in order to reach this true happiness. Gautama Buddha is also an extremely kind and peaceful religious leader.


Use of Gautama Buddha's Statues, Sculptures, Paintings: Customers purchasing any of the Gautama Buddha statues, sculptures, paintings or any other piece of art purchased at CeyPearl are strictly advised against using them in association with nudity, sexuality, coarse language, violence or any type of wrongful actions.

Customers are encouraged to use purchased artwork associated with The Buddha to cultivate harmony, peace, calmness and veneration. Customers may also use them for home decoration in accordance with proper respect granted to a religious leader.

If you're intending to use them for any of the prohibited uses stated above please do not purchase them. This Condition is applicable to any portrayal of a religious leader on this website wherever indicated in individual products.